The videogames of today are Multimedia Interactive Works. They are a contemporary as well as anachronistic artistic expression since they contain both quotations from the past and innovative elements in their aesthetics and in their interactive relationship with their players. Myths, heroes, sceneries and references to famous works of art mingle with various types of soldiers and characters from contemporary society. In these videogames we can find inspiration from and revisions of Primitive, Renaissance and Pop art. This section will introduce the visitor to the Game Art of gameplays, with an in-depth examination of the relationship between cinema and videogames. There will be an artistic presentation flanked by a critical analysis of the concept of the post-industrial landscape, a landscape typology that has become an established part of the contemporary consciousness thanks to cinematographic and videogame art. It will include a detailed thematic examination of the character and creators for each videogame producer. Games designer’s and concept artist’s works and personal works live above all in the memory of their hard-disk, they face the world of blogs and of individual sites. Thousands of ‘tables’, sketchs, sceneries, visions and characters bring with them the imagination and the vitality of their own creator and they don’t arrive forcedly to the one who enjoys this art, but being part of the gameplay of a game.
Another aspect becomes crucial in this context: the solid interpretation of the virtual work and its material transposition, so that from its world it can converse with a current world not yet ready to receive its fluctuating presence. The concept artist’s category is particular in comparison with the immediate one of the contemporary artists. Their own art can be defined a post-geographic one, both for internal contents and for relational contents weaved in order to realize the product videogame. In the individual case the author’s imagination – better analysed in the following essays – doesn’t report precise signals of his historical-cultural-social real context, at least in the most part of the artists here, but it projects and produces autonomous visions often auto-referenced, effective in creating new maps, new architectures, new life forms, as near to the late romantic inspiration as to the fantasy one and sometimes to the photograph and the contemporary painting themes. In this case the work is produced entirely by the author and it has the overall characteristics of his personal print.
INDIE > The Indie scene features many inspired artists and developers, who are aware of their cultural role and include in their work references to countless cultural fields, from art to philosophy and literature. Advergames have often a high artistic quality which includes a reflection on crucial themes such as the environment and contemporary society.
…‘Art is all that men call art’ Benedetto Croce affirmed. ‘A game is a game only when the player affirms it’ Gregory Bateson specified. The border between game pleasure and ethno-mathematics is thinner and thinner, while the titles of the videogames available and today shareable on line grow up. Not just the creators’ global shop, but also the players’ collective post-geographical enjoyment, everywhere in the world. Are they entering our world or are we entering theirs?
a febbraio 16, 2011 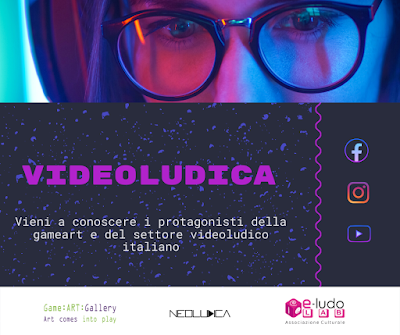